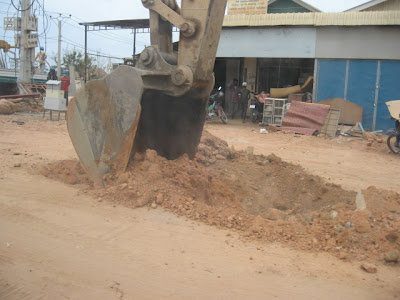 There is always lots of construction going on around here. The last few months our roads have been full of earth movers and different detours each week. Always made sure I had my helmet on in case I got hit on the head with something!
If you saw the flood photos I was posting here around August- November last year, you will have seen photos of our watery roads. 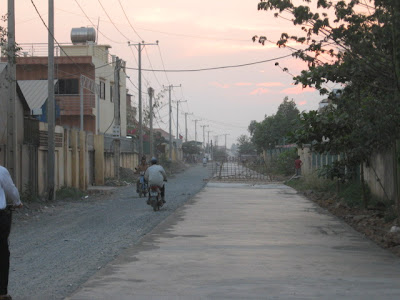 A few of these roads are being fixed. They have been using cement and iron rods, it looks pretty strong! They have been doing one part of the road at a time, so for awhile one lane was cement, about 15cm higher than the other side. 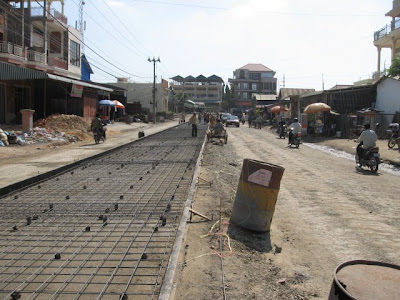 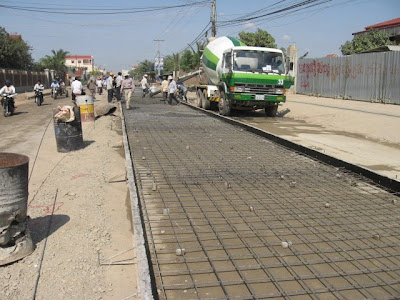 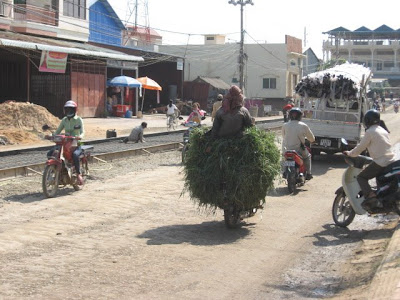 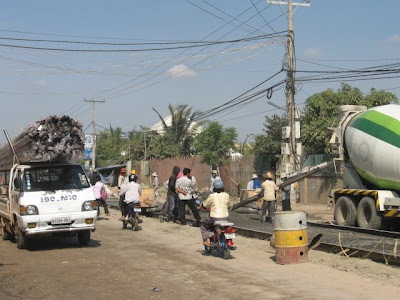 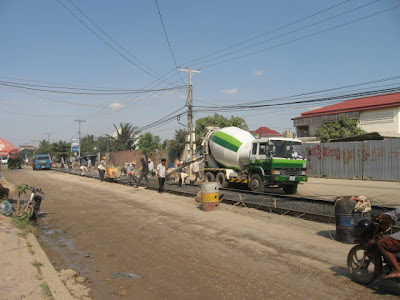 Posted by Katherine at 11:08 am No comments: 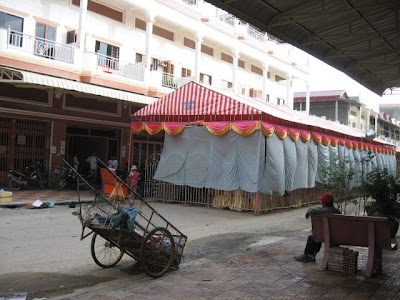 Wedding marquees are often set up on a road, as I mentioned before. The other Sunday there was one right outside our church! We had to walk through someone's wedding to get to church. 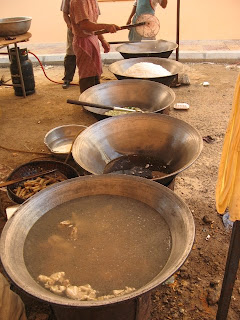 The wedding caters set up their kitchen on the road near by too. The photo below I took from inside church- you can see how close the speakers were to us. So noisy! 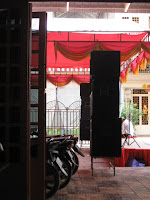 More photos from this on Kronicle Clicks (ask me for password).(album 2009-03 church/wedding)
Posted by Katherine at 10:46 am No comments:

We mentioned in a previous post that the church at Preach Vihear was meeting in someone's house. Unfortunately that can't happen anymore, but another lady who has a much smaller house hosted their meeting yesterday. Her house is too small to fit everyone, but they took all her things out, except for her bed, then cut the wall near the window to make it bigger.
Posted by Katherine at 2:43 pm No comments:

Soeun and the students walked up to the temples, most people hire a moto I think. It took them an hour and a half!
Posted by Katherine at 6:57 am No comments:

Temple on the cliff- Preah Vihear! 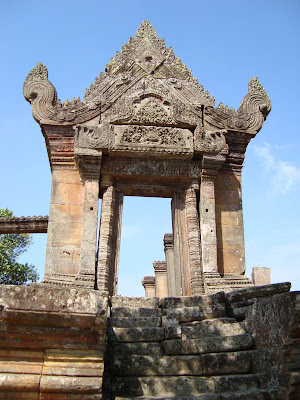 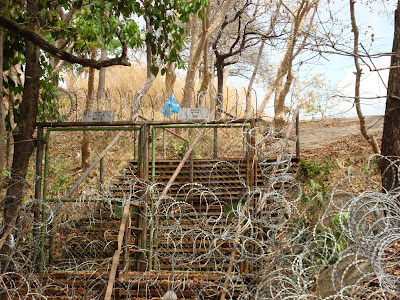 Since then this entrance has been blocked. There are troops on both the Thai and Cambodia side of the border here. Both countries claim it as their own. Else where on this blog you can read about the Khmer/thai relations and the tensions that were at their height in October last year. 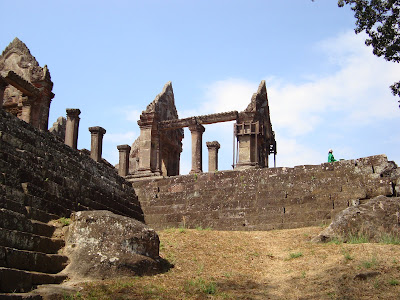 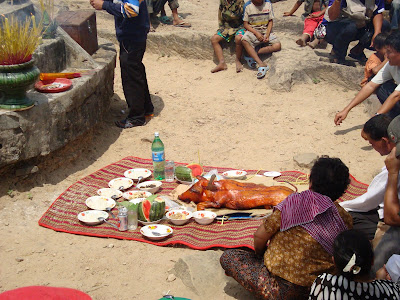 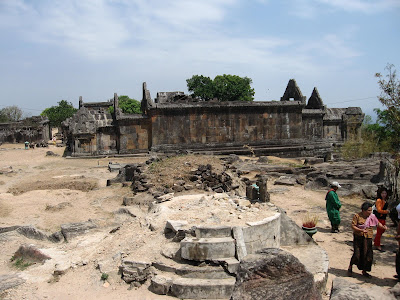 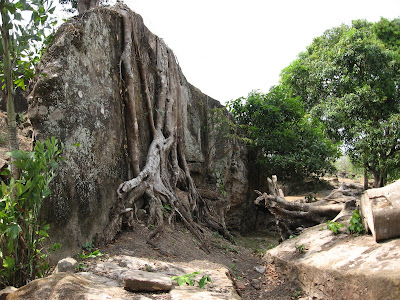 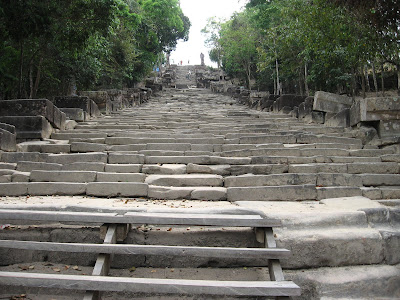 Cambodians here worship DaDy, a local spirit to ask for protection. He was a General who lived here many years ago. 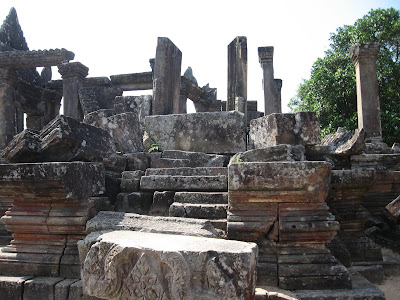 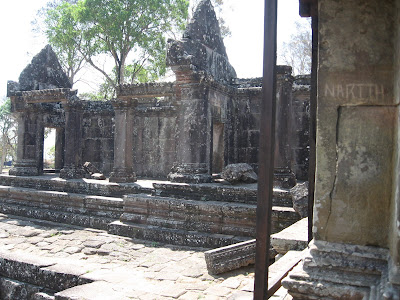 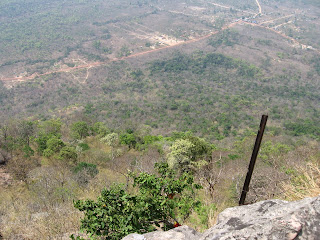 The photo above is taken from the edge of the cliff that the temple is built on. You can see the roads and the village at the bottom of the hill on the Khmer side.

If you have read about Pol Pot time you may have read about some Khmer refugees being pushed back into Cambodia by Thai people. I think this is the area where these Khmer people who had fled their country to the safety of Thailand were taken back and pushed off a cliff. 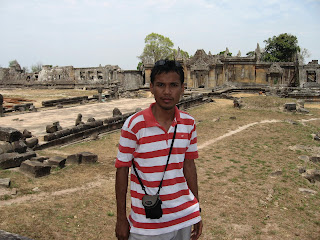 Want to know more? See Journey to the top of Cambodia
Posted by Katherine at 3:05 pm No comments:

Cambodians go cross cultural in the comfort of their own country. 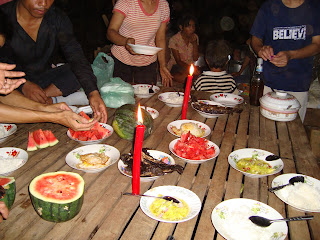 Recently Soeun and a group of Bible school students spent a few days in Preah Vihear province. Visiting this remote location was a cross cultural experience for Soeun- even though he is Khmer.

A church in Preah Vihear province
A lady about 27 years old makes multiple trips on her motorbike each Sunday to pick up kids from all around her village in Preah Vihear province. She takes them to her house, where she lives with her 2 children, the eldest is 11 years old. (Someone younger than me has an 11 year old! They tend to get married young in villages. Her husband is a farmer and often has to live out in the fields so she is home alone with the kids.)

Each week they sing Christian songs and memorize some parts of the Bible. There were only about 5 Bibles for around 20 people. They don’t have a pastor (or a church building), so their meetings are different from what I know as a “church service”.

Even though they don’t have the plans and strategies that a Phnom Penh church might have, they have continued meeting each week for years. Soeun was really struck by this. So much human effort and planning goes into church as we know it. In contrast this church is planned and held together by God, in a way that is more obvious than it might be in a city church.

When Soeun preaches in Phnom Penh, the church members sit and listen. But when he tried to preach in Preah Vihear it was a whole different experience. When they understood something or were excited it was obvious by their body language and comments. So it was obvious to him when they didn’t understand what he was saying as they sat their looking confused. He had to work hard at using language they can understand easily, rather than the sort of language used in a Bible school.
One sermon was on a passage they knew by heart so he got them to recite bits of it though out his talk.

Currently there are two students at the Bible school from Preah Vihear. They are planning to go back when they have finished their study. Soeun is really excited about this, there is so much need for them there. Generally in the Cambodian church leaders and church members with a good Bible knowledge are needed.

When it was time for the team to leave, the children had already gone to school. Soeun was sad the kids couldn’t see them off as they had so much fun together.

Until recently Preah Vihear was ‘cut off’ from the rest of the country as there was no road access. Also it was one of the last strong holds of the Khmer Rouge so it was known as a place of fighting.

Siem reap province is known for Angkor Wat, Kompong Cham is known for rubber trees, Battambang is known for rice and oranges but Soeun doesn’t remember hearing anything special about Preah Vihear province.

It now boasts a World Heritage site- the temple on the border with Thailand. The Bible school team went to visit; there are photos elsewhere on my blogs.

Before the team headed up there they made a program of events. They knew they would probably need to be flexible as they didn’t know what to expect. This was true- even more than they thought. Lots of surprises.

Some of the things Soeun wasn’t expecting included the fact that there were schools and markets and the crime rate seemed to be less than in other parts of Cambodia. We don’t know any official stats on this, but from the way people live it seems to be the case. Parents were happy for groups of girls to walk home in the dark, and it must be really dark as there is no electricity (apart from people’s generators which they turn on at certain times). Surrounded by thick jungle too. There didn’t seem to be gangs there as there are in other places.

One of the boys got a nail in his foot. When this happened Soeun was surprised to find the community didn’t seem to have access to medical care.

Lots of jungle and dust, like in R’kiri we visited at Christmas.

That’s just some of the things that Soeun told me within the first few hours of getting back to Phnom Penh, plus the fact that the team had brought back a boy. Buts that’s a story for another day… maybe an email rather than a blog.
Posted by Katherine at 5:19 pm No comments: 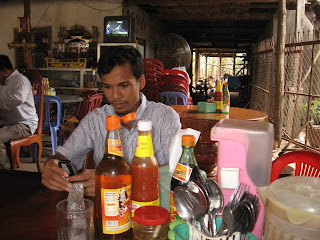 Posted by Katherine at 11:15 am No comments: 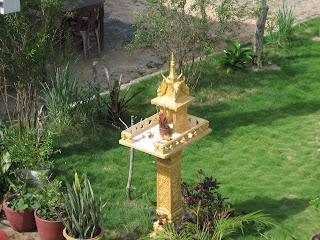 One of my first impressions of Phnom Penh, when I arrived three years ago, was that there were so many religious things everywhere. In many ways it looked the same as another Asian city I’ve lived in, apart from the monks, temples and “spirit houses”. 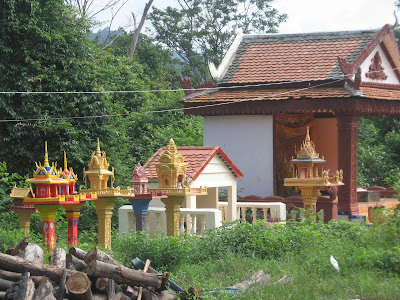 Almost every shop and house has one of these spirit houses you can see in these photos. These mini houses are used for offering candles, incense, food and drink to local spirits called “neak da” 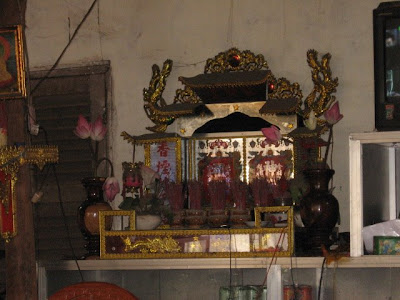 Officially a Buddhist country, Cambodians actually practice spiritualality that is a mixture of Buddhism, Hinduism and animisim. 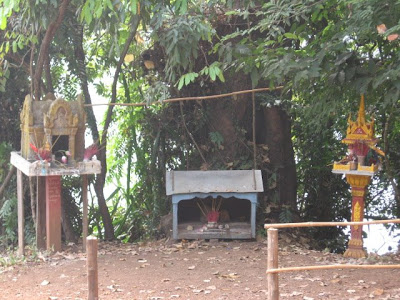 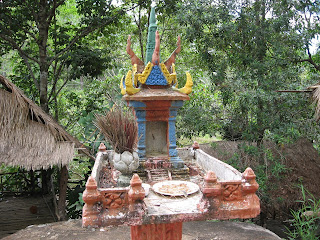 Posted by Katherine at 9:29 pm No comments: