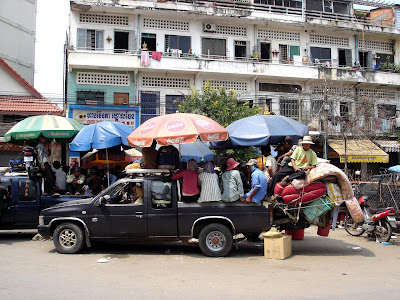 Posted by Katherine at 2:29 pm No comments:

Email ThisBlogThis!Share to TwitterShare to FacebookShare to Pinterest
Labels: Traffic

If you want to see photos of when the team was here go to Village Visit. If you want to read about my experience of hosting a team of 11 Aussies for 2 weeks then keep reading.

The group was from one of my churches in Australia. Soeun and I really enjoyed their visit, and felt really encouraged to know this church is partnering with us. I've been on this sort of trip before, but I've never been the one organising it. Before I nervous, wondering what it would be like. It was exciting and exhausting to have them here. They were all very eager to learn and had many questions.

Some random things in no particular order:

*A Cambodian hired a bus for us. It was a bus for 20 people, so I told the team it would be big enough for us and our bags (11, plus a Khmer friend, plus me and driver=14 people). However the night before I was told it only had 16 seats! When the bus turned up in the morning it actually had only 12 seats!!!!

A bus for 20 people does not mean a bus with 20 seats. Even though I know that Cambodians pack more people and things into a smaller space than I'm used to, I didn't realise what was going on here until I saw the bus.

When buying a seat in an interprovince taxi ex pats usually buy 2 seats each , just so they can get what we would call a full seat.

So I guess that's an example of how different cultures/different mindsets can have misunderstandings. So if you know any people working cross culturally, this is something to pray for them.

*When we visited places the team did an Australian presentation. I really enjoyed it it! It was also fun for me to listen to the translation. From this I learnt the Khmer word for "state" (as in what Australia has instead of provinces) and Indigenous people as well as hearing 4 different translations of life guard/lifesaver (surf). I only understood 3 of them though.

*Team members kept commenting on things I've never noticed, like the way people modify their moto engines, and that cows here are skinnier than in Oz. I don't remember seeing cows up so close in Oz, and I never really look at motos.

There is a big gap between rich and poor here, many team members were seeing this for the first time. This was interesting for me to see as I guess I've gotten a bit used to it.

I learnt more about Cambodia by watching them learn about it, I guess different people see different things.


*I think I felt a bit of reverse culture shock when they left. Three Cambodians and I went to the airport to say goodbye to the team, then the four of us went out to dinner afterwards. As soon as the team left I found my 3 Khmer companions began to speak Khmer language! I could only understand a little of what they were saying, and I couldn't contribute to the conversation. This continued over dinner and I felt frustrated and left out.

At first I felt surprised that this was happening. But actually that's what my life is like most of the time, it was just a surprise because I had been part of an English speaking group for two weeks.

*Before they left one of them must have gone around our house putting clip on koalas everywhere. I keep seeing them in the strangest places all over our house.
Posted by Katherine at 4:18 pm 4 comments:

My in laws are in high school, so the issue in here is one we often think about. Parents pay teachers bribes.
Posted by Katherine at 3:55 pm No comments:

If you want to find out the latest about the Cambodia/Thai tension you may have heard on the news this month or the national election this Sunday, try these links:
Phnom Penh Post
Everyday
Asian Observer
Mirror (mirrors Cambodian language media)

Some blogs that have political/ sensitive Cambodian news: KI media and Khmerization
Posted by Katherine at 3:21 pm No comments:

I have just come back from a visit to a village. I went with a group from Australia. Some of them had a go at planting rice and making Khmer noodles. 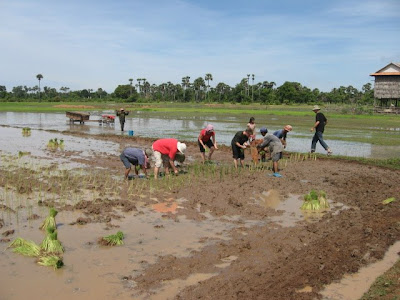 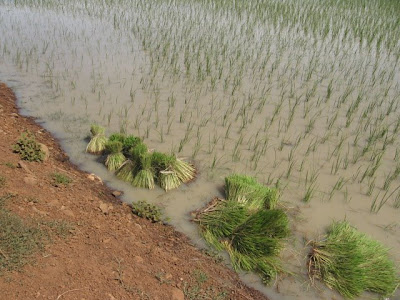 Some also tried their hand at using a weaving loom. 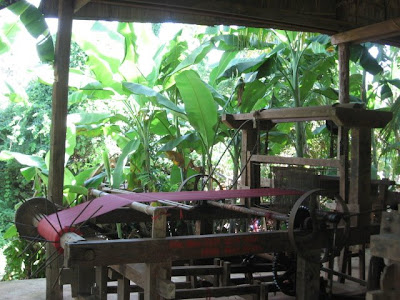 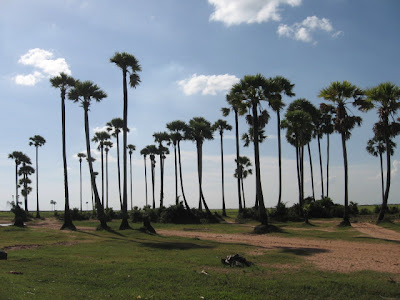 We saw lots of palms and banana trees. Some of our transport was by cow or donkey cart. At one point the cow got excited and ran away, while it was supposed to be pulling the cart! 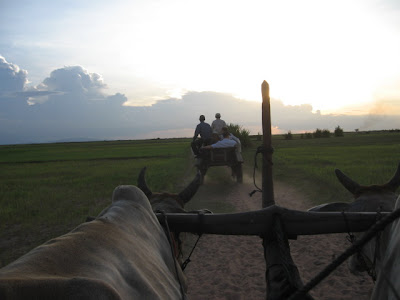 It has been great having the group visit. I've had fun showing them around my world, including walking to my local market and a bus out to visit my in laws. These are things I usually do by myself. Many of the group members I already knew before this trip, but I hadn't seen them for about 10 years, so its been good to get to know them again. One member has spent some time with Soeun talking about the music stuff we wrote about the other month in an email, as well as bringing some resources to help him with it.
I haven't checked my email for about 2 weeks, so don't be offended if I haven't answered you yet!
Posted by Katherine at 1:21 pm No comments:

Email ThisBlogThis!Share to TwitterShare to FacebookShare to Pinterest
Labels: General Photos, Outside the city, Province of Kampoung Thom 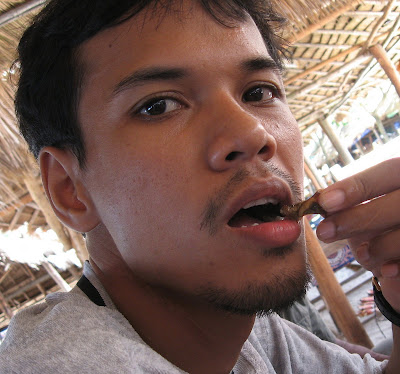 Fried crickets for sale at the market. 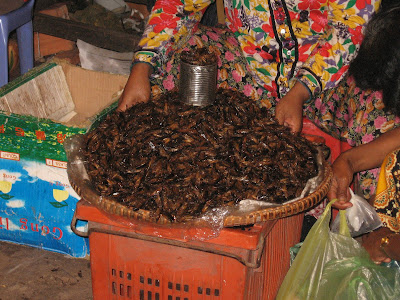 Our food: His and Hers 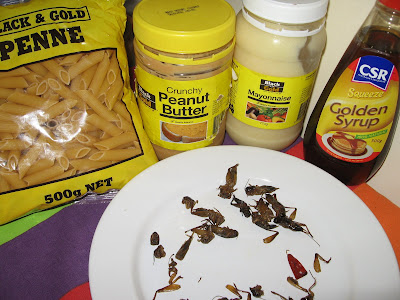