Being sick is not a vacation 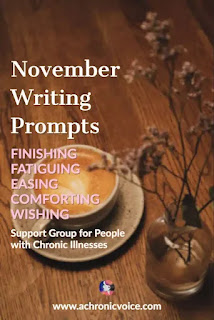 Things keep changing so quickly, it feels like there is always a lot going on. I'm using the word prompts from A Chronic Voice to capture some of our life at the moment.

It is Water Festival/Boat rowing holiday here in Cambodia. The time of year when the river changes direction and people eat dried, pounded rice. The end of the rainy season is a great time to clean the mould off everything.

Soeun has taken a group camping for this holiday the last few years, but this year they are using our backyard for holiday fun. Lots of neighbors are busy getting ready to move, so he ended up cancelling the trip.

Finishing up an infection
It’s a relief, and kind of a surprise to say our child’s sickness is finishing. With chronic illnesses so much part of our family life, I forgot some pain could heal in a matter of days.
Our child has been in pain since Thursday. After a few days of painkillers, we went to the doctor and got some antibiotics. It's Tuesday now and the pain from the ear infection is gone. We haven’t given pain meds since Sunday.
We didn't do school last Thursday or Friday. I called in a holiday at the time, but now I'm renaming it sick days. We stopped doing school because health made it hard, not so we could be refreshed.
Easing back into homeschool after a forced medical break of many months
It's not like picking up where we left off from. That day in February when the doctors told us to rush our child to the hospital we dropped everything. We had no idea it would be over 6 months before we could get our school mornings back.
It has felt like starting from scratch again. We have not jumped into the maths program I was getting them started on at the end of 2021. In late August I had the children do half an hour each morning of a maths program we used in 2020- early 2021. It felt like going backward and forwards at the same time. On the one hand, at least we are in a daily deskwork maths routine now. On the other hand, we are not using the lessons I had planned we would be doing by now.
I was never trying to school them according to what grade they would be in if they went to school. I’m aiming to help them progress through maths and English skills, so we can't really get "behind" in school work.

Reading this book is comforting (and confronting).  If you are involved in Christian ministry, either yourself or as a supporter this is a great read, but not for the faint of heart. 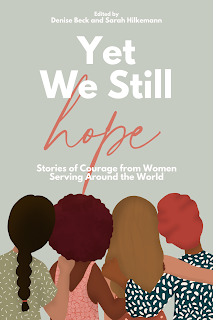 Wishing this was more obvious
Taking a medical break from school/work is not the same as a vacation/ holiday!
It sounds simple when I put it like this but I keep bumping up against this in the wrong way.
For example, we were in the hospital in February so we didn’t do homeschool that month. I was told the first little while with Type 1 in the family is intense so I thought a few months break from school was in order. March/April is our long school break/summer holiday, so we never do any school then anyway.
I tried to get started with school again in May, as that’s when I was going to start a new year anyway. But, it felt too hard. Not only were we still struggling nightly and daily with diabetes we also hadn’t had a break. While we had had a 3-month break from school, it was a time of high stress and not much sleep. I didn’t consider this when I tried to start school in May. We were exhausted, and not refreshed from our break.
I remembered back a decade ago when we were in the first years of my husband's sickness. Every break I had from work was super exhausting both physically and emotionally. For example, when I took a week of annual leave one June we had sickness all week. We spent the entire final day in the hospital, from dawn to dusk. It was a super scary day, which still impacts me even now. We got home late that night, and I turned around the next morning and went back to work. Ideally, I should have taken a break after that, but I didn’t realise that, and I don’t know if I could have organized it anyway. But I turned up for work drained. Walking straight from what I now recognise as a traumatic experience into a new term at work.
Being sick is not a vacation. I wish this was more obvious to sick people and society generally.