My favourite way to peek into my past is currently using this blog, so I’m motivated to jot down things how they are now (in these few months)  before this “normal” travels into the past as well.


Rockets, playing the mud, building things and using their torches (flashlights) are how the kids love filling their afternoons and evenings. During hot days they don’t get to play outside much until it starts getting dark. Recently it’s been dinner early then out to play until bath time. 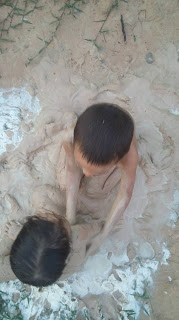 What was previously reserved for holidays is currently our daily routine! Pre-kids, and pre-moving to SR tuk tuk rides were for special occasions, and travelling alongside the river in SR with all its greenery was only ever done when we were having a break from the capital city. Sitting together, without the distraction of housework and toys sometimes ends up being the time the kids start asking me questions, or telling me things. Only a few months left and this will end!

And then we arrive at preschool. I often run into other parents, many from families who are also have one Khmer parent and one expat parent. Sometimes the parents are people were friends with before we all started at preschool, others I just started getting to know at drop off and pick up after hearing our kids talk about their kids at home. One family we actually met the first time in a supermarket. Another is a friend’s nanny’s other client from a couple of years ago. Other than Khmer the nationalities include but not limited too- Canadian, English , Australian, Irish, Philipino , Austrian and German.  Hoping we can stay in contact with some families when we finish up at preschool.

A rush of new things

The size of our last house moved deceived me. It looked small, only a few kilometres away but we are still in transition. A rush of new things reminded me the other weekend.

First (proper) time to have friends over was so refreshing! We used to have weekly play dates at our old house, so it feels great to start having people over again. I don’t like to have people over until I’m settled in.....but I don’t feel settled in until I’ve had people over. One of the many moving house stresses.

A roof over our front door/outside steps- just in time for rainy season! Soeun installed a light too, we have been eating outside and then cleaning up in the dark.

A mini electric oven joined the family- so bran loaf and zucchini slice cooking have resumed!

After clearing out the Revelation sermons from my phone there was space for ones on the book of Isaiah. To help me I’ve also got Kirk Patston’s Surprising Salvation, and Howard Pesketts’s  Bible study book.

Weekly Psalm reading is in action at the moment! On Sunday the Khmer congregation read it chorally. At home we read bits of it in both languages throughout the week, here and there as we have time and concentration. Sunday just gone we read Psalm 12 at church, so this week at home we are reading Psalm 13. The kids can read numbers and some letters so they like trying to find it in the Bible.

Posted by Katherine at 11:24 am No comments:

One of our favourite things to do is to stay home alone. With traveling obligations, workman and relatives who live with us we hadn't been able to do it for awhile. Over Khmer New Year last month we had a chance and it was GREAT!!! There were 4 days with just the 4 of us at home.

We had just been given/lent some new-to-us kids books. The Astronaut book looks innocent but it launched our son into a huge rocket obsession!!! And the poetry book - at first I thought they would get bored as there were more words than pictures on the page..but the words were so amazing they were laughing and quoting the poems all week.

The kids are old enough to play and eat without too much help from us, but young enough not to know that everyone else was either travelling or having a huge water fight. Old enough for us to have relaxing time at home with them, and young enough not to be asking to go out....
Posted by Katherine at 11:08 am No comments: