THREE MONTHS
A string of fairy lights ties my first pregnancy/newborn memories to a night market in Chiang Mai, Thailand. We decorated our house with the lights, along with postcards and photos. It felt like our place for those 90 days of maternity leave from Cambodia/Australia.

I tried to make our room feel like home as quickly as possible (without investing too much) as we were only going to be there for three months.

TEN MONTHS
I tacked up, taped up and tied up satiny scarves from the Russian market and photos of friends and family to begin  my first year in Cambodia. The walls were covered in brown marks from the last person's taped up posters, the ceiling was really low and there was little natural light or air flow.

It was hot and uncomfortable but I needed to make my room feel like home as quickly as possible (without investing too much) as I was only going to be there for ten months.

ONE  (academic) YEAR (multiplied by about 6)
Again, photos up on the wall straight away in my Australian student accommodation (and sometimes a rainbow mirror ball). Some years it was my uni course, Bible college year or husband's Bible college.

I tried to make my/our room/s feel like home as quickly as possible (without investing too much) as we were only going to be there for about 11 months.

EIGHTEEN MONTHS
To combat the dark, cold months of a north east Chinese winter I bought a gaggle of pot plants for my flat, as well as arranging  photos and pictures above the radiator. The colourful doona cover I received from friends at uni decorated my sofa. Finding a place for the washing machine, that still allowed me to use the kitchen and the bathroom was a big challenge but thankfully got done.

I needed to make my room feel like home as quickly as possible (without investing too much) as I was only going to be there for eighteen months.

TWO YEARS?
The patterns breaks down here, I would have loved making it home straight away, especially as we had come from 2 years of stress and were due to have a baby in 6 months...however, the owners were selling so we had to go month by month not knowing if they were going to kick us out- so stressful not to be able to make it feel like home, it had felt like such an essential thing to do all the other times I've moved house. I need a home to rest in so I can function.

FOUR YEARS
Again, the pattern breaks down but for a happier reason. When we knew we would be in the same house for FOUR YEARS we attached hooks and hung empty photos frames on the wall. No need to rush putting photos in, there's plenty of time to do that later. We didn't need to make it feel like home as quickly as possible, as we would be there for FOUR YEARS. So when it came time to pack up we laughed when we took down the still empty photo frames...

I didn't really get interested in last week's Velvet Ashes word until I read The Grove and the readers blog linked up. When I did I realised this is an aspect of expat life I want to record here.  This isn't an exhaustive list of house moves but its the general vibe of the last 20 years. 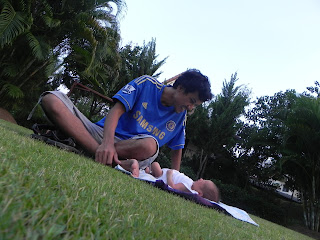 Nong Vang
Posted by Katherine at 5:28 pm No comments: