Happy Birthday Dad! Here is a pun for you. 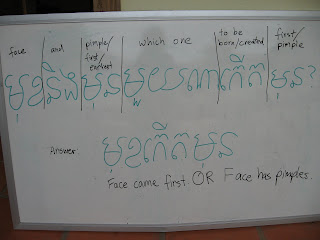 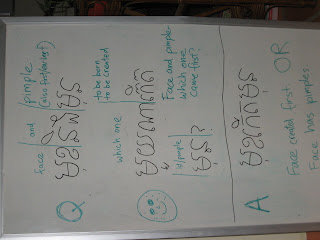 Posted by Katherine at 12:48 pm No comments:

You know it is almost April when.....

…the weather gets hotter and people start playing Khmer traditional games outside at night.

The last few weeks the temperature has gone up. It’s hard not to feel lethargic this heat, and its easy to get a headache. April is infamous for being The Hottest Month of The Year.

Also in the last few weeks people have been playing Khmer games in the lead up to Khmer New Year which will be celebrated in mid April. The games mostly involve some running and laughing. I’ll probably tell you more about this later.
Posted by Katherine at 12:47 pm No comments:

Coming from Australia the land of the drought to Cambodia I was surprised. To keep cool I was told to have lots of cold showers each day, rather than turn on the air con. Why? Air cons use lots of power and power is expensive in Cambodia.

“…an estimated 40% of Cambodians still relying on car batteries as their sole source of power. Those same people are also paying more than most consumers in the world with no respite from rising cost.”

“…Electricity in Cambodia is among the priciest in the region, if not the world.”

We live in the city so we have power. And on top of that we live on the school campus and the school has a generator. So when the power goes off, it comes back on within a few minutes. This last week though the town power has been on and off heaps, and I think the school generator/s must be getting too tired and hot. The power has been off a lot. The meat in our freezer defrosted, so we’ve been eating lots of beef and fish this week!
Posted by Katherine at 4:30 pm 1 comment:

Email ThisBlogThis!Share to TwitterShare to FacebookShare to Pinterest
Labels: Economy

If you want to see photos to go with what I wrote before go to the Expat Advisory site. They run a blog contest and I entered "What colour is the wind?". They added some photos! I think you need to go this month to see pics, as its a monthly contest. I notice they changed it to USA spelling, and the first time KSs name appears you can tell its been spell checked too.
Posted by Katherine at 12:51 pm No comments:

What colour is the wind?

What colour is the wind?
“Ouch!” Kimsoeun my husband laughs at my cry of pain. He is the one who is sick, so why am I screaming? And why is he laughing?

He has had a headache for a few days, but that’s not the pain that makes me say “Ouch”.

To treat his headache he has asked me to “ gos khjol” his back. So I’m scraping a small round metal lid up and down his back until his skin turns red, using a menthol rub as a lubricant.

When his mum does it he ends up with two red lines down either side of his spine, and smaller rib-looking lines going outward from these main two lines. I’m trying to do the same, but I only manage a few small, faint lines here and there. He wanted me to scrape harder but I felt like I was hurting him.

Sometimes “ gos khjol” is translated as “coining” because you can use a coin to do it. Cambodia doesn’t have coins anymore, but Cambodians in Australia use coins and Vicks. It’s similar to the Chinese medicinal practice of “cupping”. Hot cups are placed on the skin until it turns red. Khmer people also use this method and call it “joop khjol”.

Once when a Cambodian husband in Australia “coined” his sick wife, he almost got in trouble because of it. The doctors who were eventually called thought he had been abusing her. After someone’s been “coined” it does looked like something violent happened to them. Red welts on the skin are surely a sign of something bad?

It seemed to be used as a general cure-all. Apparently it can help if you have a fever. “Coining and cupping reroutes the blood flow by opening up the arterials near the skin surface cooling the blood and in turn it can reduce fever.” (Dr Sheftall, American Medical Center, Phnom Penh Post, August 2007)

Sometimes when Kimsoeun has a headache he pinches his skin so hard it stays red for the rest of the day. He explained this is called “jup khjol” and a likened it to a massage. A pretty painful massage if you ask me!

Many Cambodians would feel that they can’t get better from their sickness if they are not “coined”.

The word “khjol” is also the word for wind. When I learnt this I understood why my neighbours kept asking me “What colour is the wind?” They would burst into fits of laughter and I would feel confused. The wind doesn’t have a colour, does it? But now I know the colour of “khjol” is red.

This time of year is when my visa and our health insurance is due. The main reason I want health insurance is so I could be evacuated if necessary. If we’re in a bad traffic accident or get a serious case of dengue fever the international doctors here would recommend being medivaced to Thailand.

Apparently it can cost around $20,000USD. I asked around other foreigners what insurance they have, to see if there was a company people recommended. But all the ex-pats I talked to are with organizations so they hadn’t applied themselves.

I found an insurance company that sold international health insurance and bought some last year. However this year we decided to buy membership of an international medical clinic instead, our membership includes an evacuation plan. There are pros and cons of both; it’s hard to know which is the best until you’re in a real situation.

The price of membership has gone up about $200 dollars compared to this time last year. They told me this is due to the fact that Cambodia in now a more dangerous place to live. Traffic accidents have increased, last rainy season there was more Dengue Fever than usual and Bird Flu is an issue. The first 2 I was already well aware of but the only time I think about bird flu is when I break an egg and remember to wash my hands well, and when I see one of the many many chicken flu ads on TV.
Posted by Katherine at 11:50 am 2 comments:

New things on our blog

Well, if you go right down to the bottom of the page you'll find a poll and you can vote. Also in the righthand side bar there is now a section called Topics on our blog (Labels) , so you can read our blog posts by topic.
Posted by Katherine at 6:11 pm No comments:

As well as learning Khmer language at the moment I’m also a student of other things such as…. 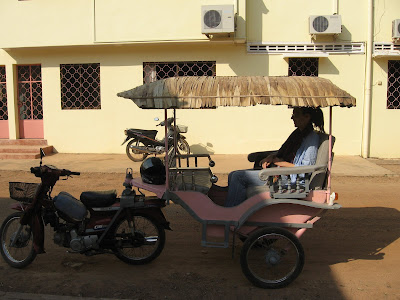 Here is a photo of a tuktuk. The most common form of public transport is the mototaxi, but a tuk tuk is also an option. More expensive but good if you have lots of people or shopping. Last year I joined the board of a Christian project that trains disadvantaged youth to be tuk tuk drivers. I previously knew nothing about boards or projects so I’m trying to learn quickly! It’s a whole new world with its own language and everything. 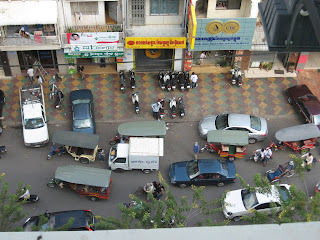 At the moment I’m learning to drive a car. It’s an interesting experience. During one of my lessons my teacher instructed me to do a U turn around a sign that looked like a no U turn sign to me! It will give you an idea about the rest of society to know that even driving teachers during driving lessons don’t obey the road rules (aka “road suggestions”).


Another interesting part of the process is trying to work out what I’m meant to pay for lessons/exams. As a Caucasian/white person it is usual to be charged more than Khmer people- “skin tax”. As well as this Cambodia is very corrupt. Sometimes I’m not sure how to tell the difference between a legitment fee and a bribe. For example the other day my teacher gave me an old traffic law exam paper so I could study the road rules. As he was giving it to me he said “2000 Reil” (about 50 U.S.cents). I didn’t have the money on me so I tried to explain that I would bring it later. I don’t think he understood me, and he eventually dropped the fee. So I think that one was an unofficial fee, but I didn’t realise it at the time. I think in the process of exams and applying for a licence there will be lots of things like that. 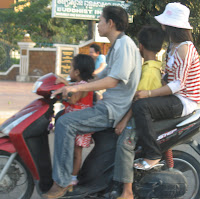 The teacher gives me driving instructions in English, but it took me awhile to get used to his voice. “I see red” is what it sounds like to me when he says, “accelerate”. I learnt the words for brake; accelerate etc in preparation for this. I tried to get him to use the Khmer rather than English but he didn’t understand me, so now I’m learning his English rather than Khmer. However, sometimes while we are driving along he’ll talk to me in Khmer about other things. Like once he was talking about the crocodile man who died the other year. Simple intructions are easier to understand than general conversation. I could get the gist of what he was talking about; at that point I wished he would give instructions in English. But now I’m used to his English.

Posted by Katherine at 4:29 pm No comments: